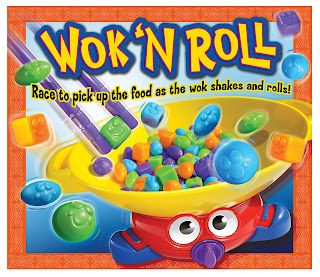 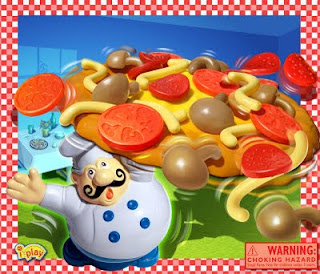 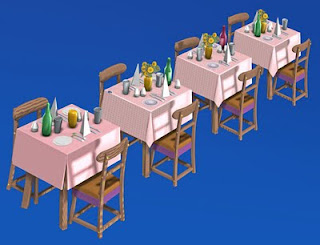 •ROCK AND ROLL PIZZAS
Last month I completed work on these two games for Interplay in New Jersey. Immediately I wanted to fly to New York and visit Vesuvios restaurant (from the Sopranos) to take some reference photos. Seemed a bit extravagant, so I opted for creating the ambience in Form Z. I’ve included my 3D setting as it came rendered from Form Z, before adding a little Photoshop magic. Because it featured only ever so vaguely in the background I knew I could get away with a fairly ‘wooden’ table and chairs. (pun intended)
The first visual I submitted for the Pizza Pile Up was summarily rejected on the grounds that the mushrooms were too suggestive! Hence they are all facing downwards and not as excited in this final piece.
I wonder if they do liver?
Wok and Roll was much more straightforward, though I did feel a little worried that these luscious little chunks of plastic look a just too delicious and edible for small children, though an age range restriction is evident on the final box design.
Please feel free to supersize an image by double clicking on it and remember that they are all strictly copyright. © 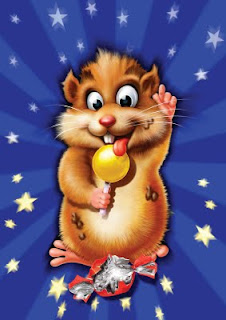 Still waiting for the Pandas to be unveiled so meanwhile here’s a chubby little character just produced for Razamatazz Magic. He’ll appear in his very own Crazy Candy trick and hopefully entertain and amuse 1000’s of children worldwide. To supersize the image double click on it but please bear in mind that all these images are strictly copyright. ©
ps. I’ve given up trying to get the text to align UNDER the images on all platforms. It seems a forlorn task so that’s why I’ve now let the text run down the right handside.