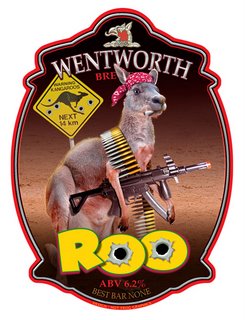 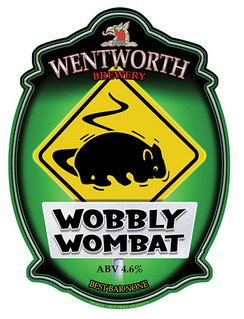 •OZZIE BEER FESTIVAL
Again, been busy for the brewery. This time two fun beer clips for an Australian Beer Festival in York.
These were two from a set of four that I particularly enjoyed producing, especially the ROO.
This took around six hours to conceive, then carefully montage and illustrate the image from various photo reference sources.
Please click on an image to supersize it but remember that all are strictly copyright©. 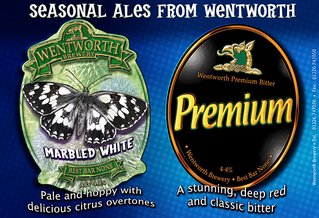 I don’t think I’ve ever told you about a very special client of mine.
In addition to illustrating yummy chocolate and ice creams I also have the privelege to work for a brewery!
As designer I handle the corporate image for Wentworth Brewery and I also design, illustrate and produce the pump clips and bottle labels for all the brews.
Yes, what a wonderful job though I don’t get to sample ALL the brews!
Since my last three illustration jobs are embargoed until much later this year (and one science book cover until 2008!!) I thought I would whet your thirst with a couple of recent pump clips for Wentworth.
These are just two of over one hundred clips, shown here on one of the seasonal promotion posters.
I have been intendiong to create a new blog purely for some of these award winning clips and labels but thought you might like to take a sneak preview right away.
Please click on the image to supersize it but remember that these deisgns are strictly copyright ©. 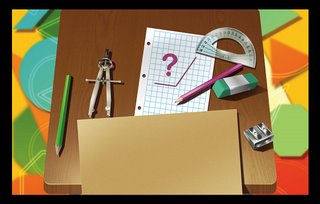 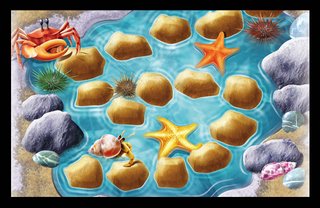 Whilst still waiting to show you the ‘perfect job’ I completed just before the year end … here are a couple of spreads from educational books for the US market.
These two spreads are from six commissioned by various design companies for use in educational publications.
Although I’m not allowed to reveal the titles and the curriculae that they will be serving I can tell you that they ranged from mathematic books to science and technology.
Rather than being stuffy and boring the art directors’ had a field day and asked for a whole variety of weird and fun things to illustrate.
These are less demanding than the ‘super realistic’ product illustrations that I’m asked to do and they allow some exploration and experimentation in Photoshop.
The two spreads illustrated here were commissioned for Harcourt Publishers who own the copyright.